I first started this blog after I had spent SO MUCH TIME trying to figure out how to rent kayaks in Korea and figured I should share the results of my research with the world-- especially since I rely on other kayakers' blogs when planning my trips (I've still yet to write the Korea post). For many locations there are not that many online resources for sea kayakers. And when you do find the resources you need- even if you are quite an experienced/ advanced paddler- people can be quite discouraging. 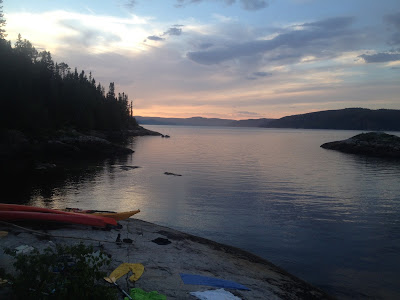 The first post is going to be about my recent trip to the Saguenay Fjord that I just got back from a couple of days ago. I'll do a quick recap with highlights and then give some resources.

The trip went so smoothly!...in part because we had AMAZING WEATHER and probably also because I have never spent so much time planning a trip before (including when I had moved to Europe twice (Ireland 2009 and France 2010)). My friends and I had to plan this trip 5 TIMES before it could happen due to weather, work, and other barrienrs. I AM SO HAPPY that it finally came together. Hopefully this post will make your trip planning a lot easier.

JULY 8: We drove about 5 hours from Montreal and camped at Parc National Grand Jardins. It is a lovely spot to spend the night and break up the drive. We saw a bunch of porcupines. They have a really adorable waddle.

We woke up and had breakfast and then drove to Baie-Éternité to pick up our kayaks and safety equipment at OrganisAction's basecamp (cabane à kayak), situated near the beach, about 300m from the Visitor's Center of Saguenay National Park. Here we saw a waterfall and some of the most beautiful cliffs of the trip. Remember as we were paddling towards the mouth of the fjord, the cliffs became less radical as we moved toward the sea.

After about two hours we got to our campsite- marked by the Quebec flag. These flags felt like pulling up to an outpost in the wilderness. We set up Platform 1, after a 30 meter portage up the shore, in anticipation of the rising tide (and this short portage was our longest of the trip). On our paddle we faced only a little headwind of up to 10/11 knots (and these were our windiest conditions in the fjord the whole trip). There was a stream to gather water in a fern forest. We also did some bushwalking, I ran laps on the beach, and Philippe got frustrated skipping stones. Brian had a lovely nap. We finished the evening with a great fire. 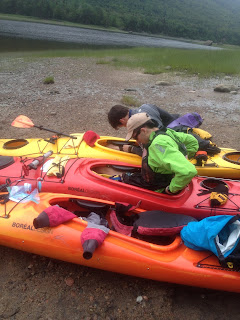 We woke up to rain, but it was nice to paddle in! Actually that morning I just felt filled with pure joy! The Baie de Tabatiere was beautiful- such a lovely town to kayak past. The rain and fog meant very little wind and the paddling was very easy.

We paddled past a pretty island and the bay in which the belugas care for their young, but we didn't see any whales. 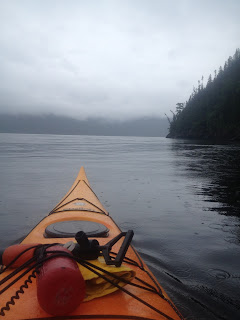 It was still raining when we got to the campsite- which had a pretty meadow with wildflowers, beautiful rocks, a sandy shore, a river, and a small waterfall. We set up camp on Platform 3 (I'd recommend Platform 2 if it isn't raining). Well the sky cleared and Philippe and I went into the bay to practice rolling our sea kayaks in the very cold water. When I successfully rolled, I cheered loudly for joy and a seal popped up 6 feet away from me. Brian named our seal friend Graydon. Graydon was cool. We enjoyed the rocks and swam in the river. Philippe and I invented the stick game (where you throw a stick and hope it lands upright). Another great campfire! Platform 5 at this campsite was beautiful and on the cliff, overlooking the water. 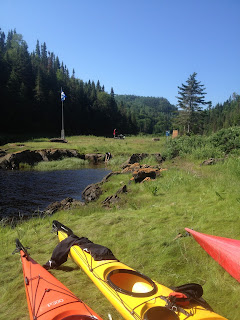 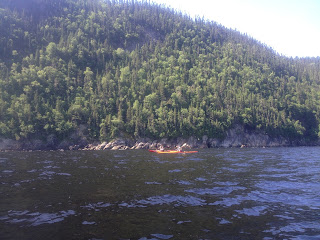 As was the case every day, I woke up first (I like my alone time in the morning) and did some yoga on Platform 5 with the rising sun. We took our time this morning (every day the tide in our favor was later and later- 8:15 this time- and there was no need to leave right on time since the paddling distances were so short. We could have easily done 30 km a day but this chill pace allowed us the flexibility to make up a day if we had to stay onshore for a day if the weather (really the wind) was bad.

I had loved the Cheval campsite and was worried the next one wouldn't compare. However, after fighting some head wind at the end of the paddle, we hung out in a pretty cove and then finished by coming into Anse de David which was BY FAR the best campsite (well besides the bugs). Each night the bugs got progressively worse as we headed to Tadoussac and I seemed to be the blood sacrifice of our group. 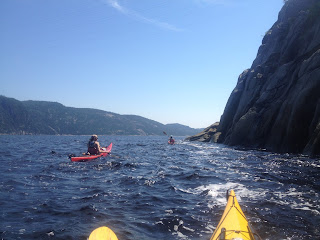 David had beautiful rock features, some great beach, a rushing river with deep pools in a canyon, a gorgeous waterfall, and so many beautiful wild flowers. Sure this was our first day with black flies and so many mosquitos (I finished the trip with over 100 bites on my body) BUT there were also lots of dragonflies, butterflies, and lightening bugs!! Here we made a new seal friend, saw a bald eagle, found mussels and clams, and watched fish in tide pools. We also swam in the canyon. We had such a nice fire that night and the sunset was on fire. Lightening was in the distance but we were sheltered from it.

Platform 5 at David was another stunner where I did some morning yoga. The guys and I then hung out in the waterfalls again. The water was flat and glassy. We went slowly through the end up the fjord. A few huge waterfalls cascaded down alongside us.

This was also the first day we saw other kayakers. There was a small group led by a kayak guide from Tadoussac. Since I hadn't seen other humans in awhile for some reason my first thought was that they were going to attack us-- weird, I know. I also said this out loud which I am sure they heard. #fail

In case it wasn't obvious- we were the only people staying at these campsites. I can't imagine how weird it would have been if other people were there. It definitely would have been a really different trip. However, since Sepaq highly discourages anyone from undertaking this trip (telling us over and over about how it is just for Highly Advanced paddlers), it tends to be pretty much empty of people. We essentially didn't see anyone besides an occasional sail boat in the far distance and some fishermen that just waved... well until the last day.

THIS WAS THE DAY WE FINALLY SAW WHALES! There was a pod of about 6 BELUGAS that swam by us. That was really cool.

We planned to meet the guys with the kayak trailer at 3:30 at Baie St. Cats. Ee wanted to take our time the last day as it was the day at wanted to hang out with the whales for longer. The ferry crossing was a fun bit of excitement. We paddled on the other coast and quite past our end point to hang out on a beach. Philippe rolled his boat again with the gear in it- well done! (his roll is always far more graceful than mine). I went for a run ( I had been jonesing- I literally run every day so 2 days off was rough). After a quick lunch we had to paddle 2-3 km against the current and against the wind to get to the boat ramp. This was really the only difficult moment of the trip and it wasn't very difficult. And amazingly 5 minutes after I pulled up to shore, the guys from OrganisAction showed up with the trailer and had dropped off our car. It couldn't have been smoother! Seriously awesome! The guys and I cleaned off in the bathroom of a Parks Canada building and began our drive south.

We drove to Parc Jacques Cartier for one more night of camping. We got lots of yummy food at the grocery store in Mount Sainte Anne (where we were last together as a group for a nordic ski race) and set up camp and went swimming in the river.

JULY 13:
I woke up early to run 7 km on trails in the park alongside the waterfalls and to go for a swim. We then headed back to Montreal! Thanks to Philippe for doing all of the driving.

I want to give a shoutout to the crew at OrganisAction for all of their help in renting us the boats and doing the shuttle. Here is their website: http://organisaction.com. If you want to do this trip you are going to have to book your campsites by phone with Sepaq (the kayak camping sites aren't available online): https://www.sepaq.com/pq/sag/index.dot?language_id=1.

This isn't the kind of trip you do for your first kayak- camping trip as there can be really crazy weather, wind, and waves in the fjord. You also need a fair bit of backcountry experience. Again we were quite lucky with our conditions. However, I highly recommend it!

Stay tuned as I hope to actually  recount my past kayak adventures!