Back in the summer of 2015, I went to Korea! Apart from enjoying its awesome mountains and amazingly delicious food, I wanted to check out the kayaking scene. As I only speak 9 sentences in Korean, finding out information about where and how to kayak in South Korea was pretty difficult. Getting much information in advance of my visit was pretty hard. Hopefully this post can help out anyone looking for information!

I wish I had been able to arrange sea kayaking in Ulleungdo, a beautiful, star-shaped island, 120 km east of the Korean Peninsula, like this guy did: https://vimeo.com/73213911 However, getting to the island would have required over a day of travel time and I was worried about getting stranded there and missing my plane back to Montreal from Seoul if I got trapped there due to weather and an infrequent ferry schedule. As far as I could tell, I would have had to bring my own kayak on the ferry with me. As someone just in Korea for 2 weeks, that seemed pretty impossible. If any of you are able to do it, let me know below in the comments!!!

Muuido island, off of the west coast, and easily accessable from Seoul's International Airport, would have been an easier island to kayak around. A local Seoul kayak club actually organizes special trips to the island. I got to check out this island, renowned for its jellyfish, but my timing was not great and was thus unable to kayak were. 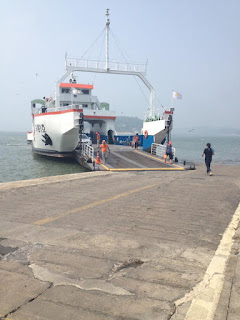 The kayak club that organizes trips to Muuido, Gangnam Canoe Club located in Ttukseom Resort, was actually the only group I was able to hook up with in order to get any kayaking in. The Han River, which served as the site for the Rowing Regatta in the 1988 Summer Olympics and is a popular windsurfing spot, is a very chill place to kayak. The river also serves as the source of water for 12 million people and has played a pivotal role in Korea's history. The water was a bit polluted when I was there, but kayaking there was a nice way to see the city. 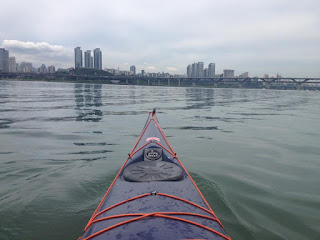 Also the Gangnam Canoe Club rented me one of the nicest kayaks I have ever had the pleasure of paddling. It felt almost like a waste on such calm, flat waters. I wished I could have taken her to the sea. But it was a pleasure, nonetheless.

To get to the Gangnam Canoe Club, take Subway line 7 to Ttukseom Resort Station. Take Exit 2a, turn left, and walk about 10 minutes along the bicycle road towards the upper reaches of the Hangang (Han River). If you see lots of tents with windsurf rigs, you are in the right place. Go to stand number 8. Their phone number is 02-457-4757.

Additionally I didn't write about it here, but there are some white water kayaking options about 2 hours outside of Seoul with some pretty chill rapids. Here is more information, for those of you who read Korean.

If for whatever reason you aren't able to go kayaking, you will still have a blast in Korea!! The national parks are easily accesible and you will get some amazing hiking in! Hiking in Korea's national sport and wow, is it fun to do there!!! 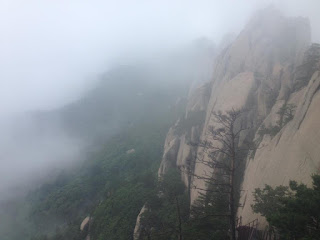